Change is the only constant thing’ and this also applies to our watching habit/entertainment industry, which is being shaped by technological developments for years. The process of change is getting much faster in the era of the internet or the interactive internet commonly known as internet 2.0. In this article, we are going to talk about a revolution brought by an over-the-top platform making the best out of internet 2.0. That platform is none other than the very famous online streaming platform Netflix. It is an over-the-top (OTT) platform which streams movies, web-series and TV programmes. Netflix has over 150 million subscribers worldwide.

It has a content of 36,000 hours which increases daily, meaning if a person streams day and night continuously then it takes 1500 days to watch all of its content.

Netflix in the early days 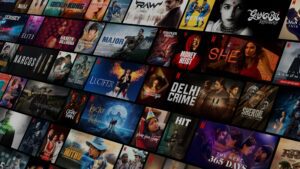 Netflix founded in 1997 in Scotts Valley, CA by Reed Hastings and Marc Randolph as a pay per rental of flat-rate DVD’s model through mail at $.50 a rental, with no late fees. It started with 30 employees and 925 titles. Founder Reed Hastings got the idea for Netflix after Blockbuster charged him a $40 late fee for Apollo 13. In 1999 Netflix started subscription-based service in which the customer paid for a certain level of membership that determined how many DVDs could be rented at one time. DVDs were mailed to the customer and then returned by the customer when they had completed viewing. Blockbuster and other vendors would rent video tapes to homeowners who would need to return them or incur a late fee.

Videotapes were later replaced with DVDs but the model of rental remained the same. Netflix introduced a business model in which DVDs were mailed to subscribers and there were no late fees. Viewers no longer had to go to a store to get the disc. The convenience customers were provided by Netflix and the new business model in which they waived late fee and mailed DVD was their first major step which made a difference between amazon, blockbuster and other vendors who were in the same business. Netflix which started with 925 titles in 1997 increased to 35,000 titles and 1 million subscribers in 2005 and in 2009 they had 10 million subscribers and 100,000 film titles. The streaming option began in 2007, with 2,000 titles available for instant-watching via streaming and around 20,000 titles in 2010.

Amid this, a big transformation took place by means of internet 2.0. In 2005 Youtube launched and other video streaming services too were growing faster due to high speed internet. People began shifting from DVD to online streaming. According to trend, Netflix moved into online streaming but it did not have content. Moreover, large media companies would not agree to license their popular movies and TV programmes on attractive terms. This led to poor content on Netflix. Considering the problem Netflix decided to produce its own content according to consumer needs and preferences. In 2012, there were over 23 million subscribers for streaming and around 120,000 titles available for online streaming.

Netflix began to produce its content from 2013 starting with three Netflix original series- House of cards, Orange is the new black and Hemlock grove. The number of original series/titles by Netflix is 850 which contains 19000 hours of content (total hours of content is 36000) means more than half of the content of Netflix is original. This huge amount of original titles is for a reason because Netflix knows that in future there is no scope of cable TV and everyone will have to stream online. Despite huge success, Netflix is currently running in loss because it spent more than it gets. They spent $12 million in 2018 and $15 million in 2019 on original content.

These original contents are way more engaging than any blockbuster movie. Around 70% of Netflix subscriber watch series on Binge-watch means they watch full season in just one sitting. And due to not having commercials it saves time and users can’t get annoyed by advertiser’s inappropriate content. Being the largest streaming service, Netflix knows what type of content and folks people want to see or they can pay to see that. They have the data of who is watching what. A survey found that 57% of subscribers are paying only to watch original content.

Key points of success of Netflix

The strategy adopted by Netflix that leads to success