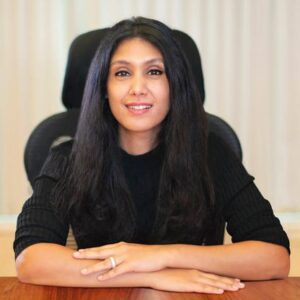 Roshni is the only child of Shiv Nadar, founder of HCL Technologies. She is ranked 54th on the Forbes World’s 100 Most Powerful Women list in 2019.  As per the IIFL Wealth Hurun India Rich List (2019), Roshni Nadar is the richest woman in India with a net worth of Rs 36,800. Born in 1982 to Shiv Nadar, Roshni Nadar is one of the most successful Indian Entrepreneurs.

Talking about her early life, she studied in Vasant Valley School and grew up in Delhi. Later on, Roshni completed her graduation in Communication with a focus on Radio/TV/Film from Northwestern University, Evanston, Illinois. She obtained her master’s degree – Masters in Business Administration from the Kellogg School of Management having a focus on Social Enterprise Management and Strategy.

Before being a part of HCL, she worked as a producer in various Indian companies. For one year of her joining HCL Enterprise, she was involved in brand building across the HCL Group. In July this year, she was promoted as executive director and chief executive officer (CEO) of HCL Corporation. Before becoming CEO of the HCL Corporation, she had been serving as the trustee of the NGO Shiv Nadar Foundation. It is a Chennai-headquartered not-for-profit NGO which operates as a part of Sri Sivasubramaniya Nadar College of Engineering.

Roshni Nadar Malhotra is the only child of India’s richest man, Shiv Nadar. She is currently the executive director and CEO of India’s largest IT services company, HCL Technologies. She is also the chairman of the HCL Enterprise, which is a $6.8 billion conglomerate that includes HCL Technologies, HCL Infosystems, and HCL Healthcare.

In addition to her business interests, Malhotra is also a trustee of the Shiv Nadar Foundation and serves on the boards of several educational Institutions. With a net worth of over $20 billion, she is currently the richest woman in India.

Apart from her corporate life, Roshni Nadar Malhotra is a trained classical musician in her personal life. Her fascination for music, yoga, and travel prepare her for exclusive challenges. In 2010, she got married to Shikhar Malhotra who is the Vice Chairman of HCL Healthcare. They have two sons — Armaan and Jahaan.

She became the first woman to lead a registered Indian IT company when she was given the responsibility of Chairperson of USD 8.9 billion HCL Technologies from her father and billionaire Shiv Nadar.

In 2013, she came on the board of HCL Technologies and was Vice Chairperson. In July this year, HCL Technologies announced that its founder and chairman Shiv Nadar stepped down from the role and the company’s Board of Directors appointed his daughter, Roshni, as the new chairperson. However, Shiv Nadar would continue to be the Managing Director of the company with designation as Chief Strategy Officer.

Before joining HCL Corp in 2009, she worked with Sky News UK and CNN America as a news producer. Within one year of her functioning there, she was made executive director and then CEO at the age of 27.

Apart from this, in 2018, she established The Habitats Trust that works for the protection of India’s natural habitats and its indigenous species. Moreover, as a trustee of the Shiv Nadar Foundation, she has driven transformational efforts in the area of education.

Roshni has received a number of accolades and honours in appreciation of her work both in business and in philanthropy. She has received many prestigious awards; some of her achievements of that time included:

Apart from this, she featured in ‘The World’s 100 Most Powerful Women’ list prepared and released by Forbes in 2017, 2018, and 2019, successively. In 2017, she was also honoured the Lewis Institute Community Changemaker Award by Babson College. Also, she was recognised by Horasis as the Indian Business Leader of the Year 2019. Horasis is a globally renowned think tank. Roshni is also an alumnus of the Forum of Young Global Leaders (YGL, 2014-19), a diverse community of the world’s next-generation leaders, an initiative of the World Economic Forum.

For all budding entrepreneurs and forthcoming start-ups, her story offers a learning curve which can inspire an entire generation. Female entrepreneurs who aim to become a successful women entrepreneur can get inspiration from her success story. Her story teaches us to keep evolving and nurturing our talent.